Using my MEMS3 Mapper you can now easily adjust the map to work with a different MAP sensor.

This is something that quite a few people have asked me for. There are two main uses:

·        When installing a larger turbocharger, the boost available may exceed the range of the stock MAP sensor. But it you fit a higher boost range MAP sensor, it will read incorrectly.

·        When adapting an EU2 (e.g. MEMS2J VVC) to use a MEMS3 ECU. This can be done by rewiring around the ECU plug alone, allowing you to use the original engine wiring loom and sensors. But the EU2 MHK100600 MAP sensor does not use the same calibration as the EU3 MHK100820 MAP sensor, so the ECU sees the wrong MAP (the EU3 sensor is not  straight swap for the EU2 sensor on the plenum either).

By following the instruction below, you will be able to tell the MEMS3 ECU about the new MAP sensor calibration so that it will then read the MAP correctly.

You will need to download the latest version (5.39 or later) of my MEMS3 Tools from here: https://andrewrevill.co.uk/Downloads/MEMS3Tools.zip

If you open a file in this version you should see a lot of new scalars listed, with descriptions “Analog Scaling ...” as shown below.

If you are using a firmware version that I haven’t seen, these will not be found. In that case just click Identify, Keep Existing and it should find them all automatically. 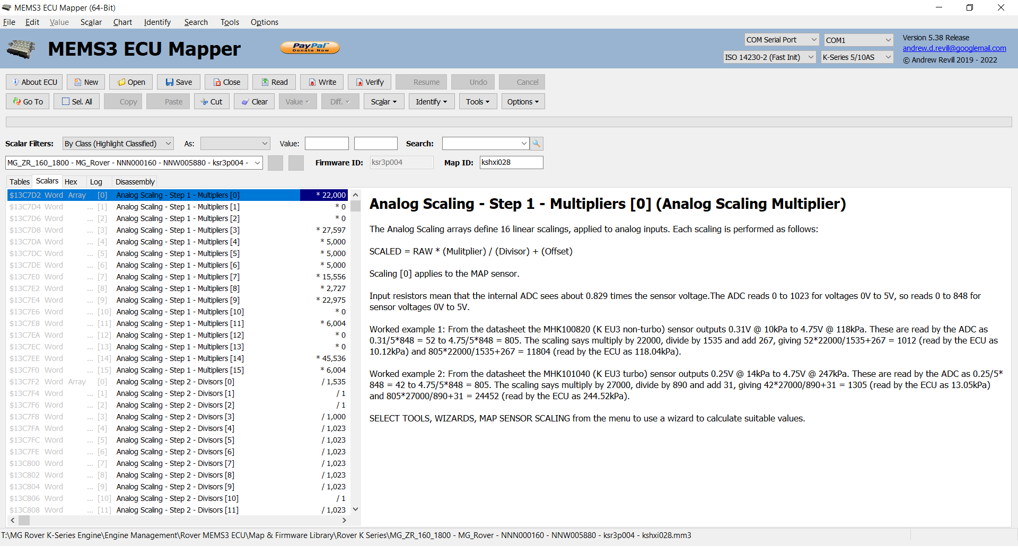 Working out and configuring the scaling numbers correctly is a little bit complicated, so I’ve added a wizard to do it for you.

If this menu item is disabled, the application has not been able to identify the relevant scalars in the map. Ensure that you have used the Identify, Keep Existing system to identify the scalars.

In this dialog you enter the pressure and output voltage range for the sensor you are using, and it will calculate the scaling numbers. You can also just select one of the standard sensors from the combo box to populate the dialog with the numbers that MG Rover used in their maps for that sensor. So far I’ve only found the formal specifications for the EU3 sensors, but I’ve worked out substitute specifications for the EU2 sensor by working backwards from figures in stock EU2 MG Rover maps. If you’re using a sensor which isn’t on the list, you can enter the numbers manually. If you don’t have the numbers, worst case you can make a guess and then look at the MAP numbers reported by the ECU and adjust until it looks about right.

If you are using a different sensor and you have some numbers, please let me know and I’ll add it to the list.

There are three numbers that control the scaling, a multiplier, a divisor and an offset. You can choose any multiplier you like between 20000 and 32000 and the tool will calculate the divisor and offset that go with it. As far as I can see it makes very little different what number you choose as the multiplier.

When you’re done, click OK to update the current map. If the OK button is disabled it means that the angles entered are invalid, for example duplicated or out of order.

This wizard is compatible with live mapping mode and will let you play with the sensor scaling on a running engine.

The output of the ADC is the multiplied by the Multiplier number, divided by the Divisor number (using Integer maths) and the Offset number is added. So take a worked example for a stock non-turbo EU3 K Series with an MHK101820 sensor: An MAP of 75kPa will produce a sensor output of 2.982V. The ADC sees 2.982/1.2=2.485V and converts this into digitised code 508. This is multiplied by 22,000 to give 11,176,000, divided by 1535 to give 7280 and then 267 is added to give 7547. The ECU reads this as 75.47kPa, which is approximately correct (When I work out my own scaling from the specs for the standard sensors, I come up with slightly different numbers for the scaling factors to those used by MG Rover, hence the slight discrepancy above. I get a divisor of 1541 instead of 1535 and an offset of 246 instead of 267. Using these numbers in the above example gives a result of 74.98kPa. I can only guess that Rover calibrated the sensors themselves and found that they weren’t quite to the stated specs, so used the numbers they measured instead. They are very close anyway. If you select one of the standard sensors from the list, the wizard applies Rover’s values from stock maps rather than the ones calculated from the specs to be safe).

You will see there are 16 multipliers, 16 divisors and 16 offsets in the map. These are all used for different sensors and scalings. I haven’t yet investigated what the others are for but the first number in each set, listed as Multipliers [0], Divisors [0] and Offsets [0] are for the MAP sensor. You can edit these numbers directly; the wizard just works them out and plugs them in for you.