The following diagram is taken from an article on the Lucas 2 Speed Wiper System at http://www.mgb-stuff.org.uk/wiper3.htm and adapted it to correspond exactly to the relevant wiring in the Caterham installation, so I've coloured the wires appropriately and also added in the connectors provided to allow for the installation of an intermittent wipe controller. These connectors also contain one green/black wire for the windscreen washers so I've added it for clarity even though it doesn't play any part in this. The diagram shows the wiper switch in the "Off" position and the wipers parked:

To wire in a flick-wipe switch, we need to be able to convince the motor that it is no longer parked. We can't just power up the orange/blue wire to drive the motor as that is shorted to ground via the wiper switch, the orange/green wire and the parking switch, so trying to power it will just blow a fuse. We need to wire in a changeover switch the overrides the parking switch. One way of doing this is shown below:

Use a momentary switch with three terminals. It is important that the switch is of the "break before make" variety, i.e. that as the switch changes over the two outer terminals are not both connected at the same time (in a "make before break" switch they will be and this will also short the power supply and blow the fuse). I believe that the standard Caterham Flash Switch should be suitable (but I haven't test it) and this will match the design of the other switches in the car.

When the flick-wipe switch is in its resting position, the cut orange/green wire is reconnected and the circuit is exactly as before. When the switch is operated, the motor is disconnected from the short to earth through the park switch and temporarily powered from the orange wire. Once the wipers start to move, the park switch changes over and the flick-wipe switch can be released.

Note that I haven't actually tested the above, but the wiper controller unit doesn't make a connection to the orange/green wire on the switch side, instead controlling the orange/blue wire directly. There will therefore be no pulse seen by the controller on the orange/blue wire when the flick-wipe switch is operated and I don't believe it will therefore be triggered into intermittent wipe mode. However, whether it responds as expected to seeing the motor coming off park would need to be tested. I think it will work OK. There are actually two different intermittent wiper control units, the Lucas 6DA as used on the classic Mini and various Triumph cars and a Caterham/Technisol unit which works in the basically same way, but may or may not respond in the same way to the changed wiring above.

The other alternative, if the flick-wipe switch is to replace the existing intermittent wipe function, is to remove the two connectors from the intermittent wipe controller and plug them together, taking it out of the circuit. The first proposed wiring diagram could then be used.

One other potential problem with this could be that as the flick-wipe switch returns to its resting position, the wiper motor is very briefly disconnected. Most switches snap from one position to the other very quickly and this would not be noticeable. If using a vintage Lucas type switch, sometimes they do not snap quickly from one position to the others and the wipers may stutter slightly as the switch is released. If this is seen as a problem, the flick-wipe changeover switch shown in either of the above diagrams could be replaced with a simple momentary switch and a relay as shown below:

Replace this (Switch Only):

With this (Switch & Relay): 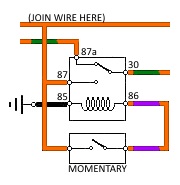 The contacts within the relay will always change over very rapidly and any stuttering of the wiper motor as the flick-wipe switch is released will be eliminated. This also has the added advantage that a simple push button switch could be used, or a two pin toggle switch as the switch itself does not need to provide changeover functionality.

One final idea; there is a way of trying out any of the above combinations without cutting any of the existing wiring. Holden Classics sell complete sets of the 5-Way Harness Connectors used for the intermittent wiper controller. If you made up a small loom as shown below, you could simply plug this in line between the existing connectors or on either side of the intermittent wiper controller if installed and test before making any permanent changes to the car. The orange wires could be neatly joined in this case by crimping both wires into on terminal pin of one of the connectors. The connector shown with solid terminals is the connector with solid male pins, the connector shown with hollow terminals is the connector with hollow female sockets. The position of each wire in the connector may be copied from the existing connectors: 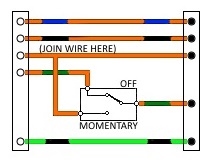 A similar loom could be made using the relay if required. 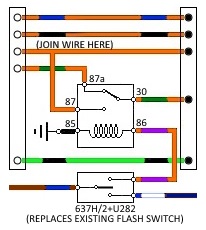